This is the season for Tribute Oranges – 貢橘 (gongju) – in China. Apparently they used to be delivered to the emperor as tribute and that is how they got their name. Or so a friend tells me. Whatever the case they are really delicious, the kind of treat you can eat by the bowlful.  At this time of year here in the US, I buy the little Clementines from California. These can also be tasty, but they are just not the same. When I stumbled across this photo several days ago, I realized how much I miss the Chinese original.

I haven’t been posting much to this blog recently, but I have been working on photo galleries, so far mostly of work from China. A lot of photos, big job – a work in progress. If you like, please hit the Galleries link above and take a look. 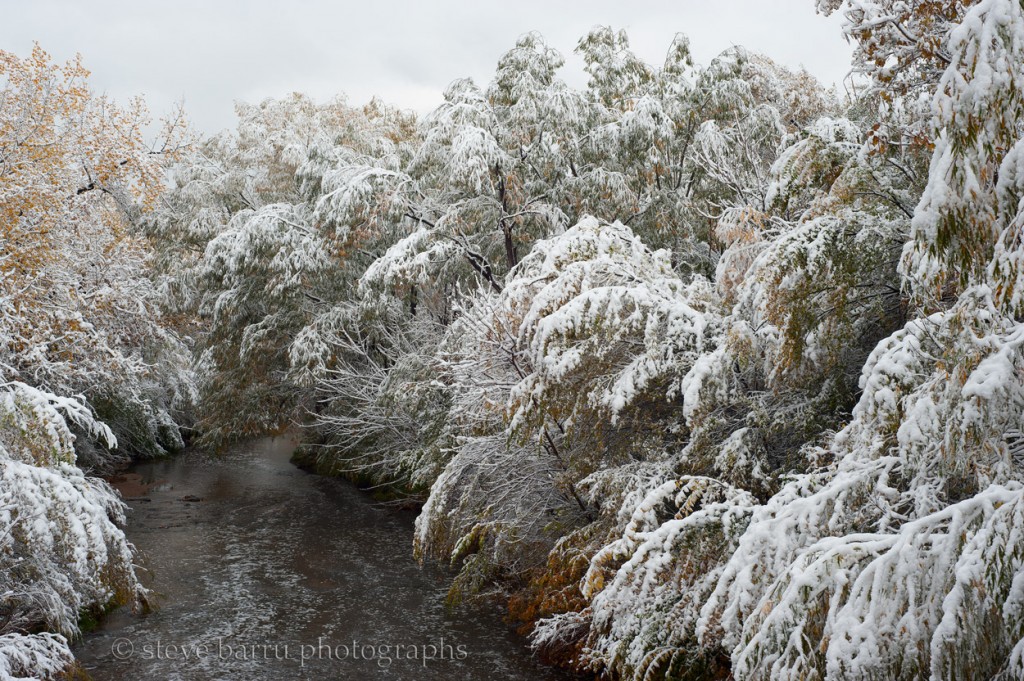 We went from shirt sleeve days to cold, wet October snow virtually overnight. I am posting this about 24 hours after shooting the image. The sun has just come out and the snow is already starting to melt.

The Rocky Mountain Arsenal has became a national wildlife refuge – no more weapons, today, just a few bison, deer, birds and an expanse of beautiful near wilderness just east of Denver.

Washington Park, located in a quiet neighborhood south of downtown, is one of Denver’s many green public spaces. It’s gotten downright fallish since this photo was taken a couple of weeks ago. It’s unlikely there will be more days like this one in 2012.

October 1 is China’s National Day commemorating the founding of the People’s Republic in 1949. Nowadays National Day begins the seven day Golden Week holiday during which Chinese take off en masse to visit the country’s historical and scenic attractions. Xinhua, the government controlled and run wire service, reports that 34.25 million people visited China’s 119 major tourist attractions (China’s tourism industry reaps golden harvest). A bit of arithmetic reveals that an average of 287,800 people visited each of these attractions during the holiday week. That’s an average of 41,000 people a day. In fact Xinhua reports that on October 2 186,000 people passed through the Forbidden City, historically the home of Chinese emperors in the center of Beijing.

By way of contrast, the average number of daily visitors to several US National Parks and Monuments during July 2011 (the peak month for each of these locales) came to 29,258 for Yellowstone, 23,991 for Rocky Mountain National Park, 22,727 for Yosemite, 21,124 for the Grand Canyon, 17,862 for the Statue of Liberty and 2,470 for the Washington Monument.

In fact virtually any place remotely appealing or interesting in China is inundated with people during the Golden Week. I used the holiday as an opportunity to practice crowd photography and read an interesting book. It is not a week to travel. Most of my expatriate friends and quite a few Chinese friends feel the same way.

One of the reasons so many Chinese travel during this holiday is because they have so few other opportunities to do so. Many Chinese companies do not give personal vacation time to employees. Huawei where I worked for two and a half years is fairly typical. Chinese staff have off China’s ten public holidays each year (though they are required to work the last Saturday of every month, in effect giving back to the company the time off for holidays). The company offers no vacation benefit. Employees can petition supervisors for leave for personal leave time, but taking more than a few days is frowned upon. Some Chinese companies do give a week or two of vacation time, but it is common for employees never to apply to take the time. Chinese friends have told me that management often expects employees not to take their vacation time. The benefit is window dressing only. Even Chinese working for foreign companies in China have told me they have never applied to take the paid vacation time they are entitled to by contract. Holidays with Chinese characteristics.